One of Spiro’s most valued products is Spirofloor®
Easily described as the most modern and multifunctional loading and unloading system currently in use within the garbage processing industry, Spiro B.V. produces two versions of this product: Spirofloor Mobile and Spirofloor Stationair

Spiro Movingfloor System
Spiro B.V. designs, develops and manufactures self-emptying bunkers, conveyors and dump platforms for use with the Spirofloor® loading and unloading system. Each project is carried out to customer specifications. These turnkey projects are installed and handed over by our own installation teams worldwide. A Spirofloor® bunker or platform is ‘the link’ between the irregular supply and regular removal of virtually any kind of bulk goods.

System operation
Operation of the Spirofloor® system is based on the difference in frictional resistance between the floor and the load. The floor consists of three groups of profiles which move independently of each other. The repetition of a movement cycle allows the load to be transported in two directions. The movement cycle works in four stages, with 1/3 of the floor sliding under the load in each of the first three stages. The groups of profiles slide simultaneously during the fourth stage to move the load, before repeating the cycle. 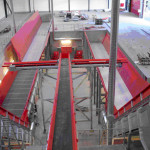 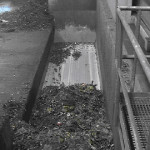 Sorting hall with a 3-double Spirofloor®